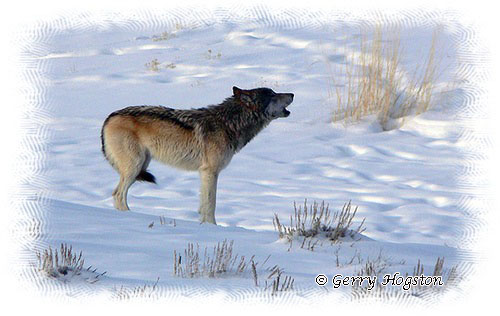 
33 degrees this morning warming to 41 degrees.  I had a couple kestrels and several hundred plus flocks of black rosy-finches today.  At 6:00 a.m. the grizzly on the carcass at Blacktail Ponds.  He usually leaves the carcass near first light and re-crosses the road to the south, and just after dark he returns to the carcass the same way, spending the night on the carcass, probably not sharing with the wolf.  At 6:15 a.m. we had a black wolf near the carcass at Blacktail Ponds.  I found my first bison calf of the year high on Divide Ridge south of Slough Creek.  At 8:15 a.m. I spotted a large black grizzly high above the Horizontal Forest in Slough Creek.  Late morning unknown to us in Lamar, Jim and Bobbie F. were following the four wolves of the Lamar Canyon pack going west in the Soda Butte Valley.  At 11:00 a.m. 993M showed up south of Trashcan in Lamar Valley.  Soon the other three 926F, 992M and Little T were found north of Trashcan.  This is the usual pattern if a road is involved and 993M (called Dark Black) he is terrified of the roads and usually sits sometimes howling and then reunites with the pack after dark.  I also had a THREE DOG DAY today.  We did see Little T again north of the Institute around 11:00 a.m. and north of YES Pullout around 2:00 p.m.  We also watched Dark Black 993M to the south of YES off and on for a hour or so.


33 degrees this morning warming to 57 degrees, but windy and not pleasant outside of the car.  At 5:55 a.m. I found the grizzly on the carcass at Blacktail Pond.  Since he has been there a few days in a row, I usually stop in when still dark and view him with binoculars and then head further into the park.  Often these mornings one or two wolves come in or show up after daylight or when the bear leaves for the day.  At 8:30 a.m. eight Junction Butte Pack wolves were on a fresh elk carcass viewed from Wrecker.  Jim and Bobbie F. were there watching the chase, but as often happens there were three chases going on.  When I arrived we looked where the wolves had disappeared during the chase, but found the just killed elk carcass in another area a few minutes later.  All the collared wolves except 970F the alpha female were present.  From 12:15 p.m. to 2:20 p.m. we sort of watched 993M Dark Black north and east of Dorothy's Knoll.  Someone saw he run up the hill and bed.  Every 10-15 minutes he would raise his head into our view.  He twice stood up so we could see the collar and figure out which wolf he was.  Late morning MacNeil Lyons called telling me about a new carcass in Crystal Drainage.  Around 4:00 p.m. Becky, Chloe and I walked out on to the Specimen Ridge trail to investigate.  A small dark carcass with four coyotes on it and lots of birds.  It was terribly windy but just as we were getting ready to leave Chloe spotted a collared grizzly coming to the carcass.  I rechecked at 6:00 p.m. and found the carcass empty with no grizzly on it.  At 7:00 p.m. I spotted a lone un-collared black wolf near the carcass at Blacktail ponds.


31 degrees this morning warming to a beautiful 57 degrees with little wind.  My first moose of the year near the entrance to the Blacktail Drive. It was a yearling calf with white legs (the cow had been seen yesterday and today with the calf).  Today was a just missed sort of day for me.  At 6:00 a.m. I looked for the grizzly and wolf at Blacktail Pond.  Neither.  Later Doug M (wolf watcher) said the grizzly came in about 6:15 a.m. and then two wolves showed up about first light.  I headed to Crystal this morning and walked out to check yesterdays carcass. The collared grizzly was finishing in and shortly moved away.   At 8:15 a.m. the Junction Butte Pack, all eleven of them were near the old Slough Creek den area.  The alpha female 970F went inside the old den, while 969F started digging a new den 40 yards east of the original.  Soon 969F moved to the old sagebrush den area of the Sough Creek Pack, while 907F continued digging the new den hole.  All three females mated and should be pregnant.  The Junction Butte Pack checked out these dens last year and then denned elsewhere.  It would be nice if they denned here as the dens are viewable from Slough Creek bathroom and other places on the Slough Creek road.  They also mated two months ago so puppies should be born within a week.  Just after I left the area, 3 or 4 wolves circled and chased a bull elk and finished him in view of everyone in the parking lot.  The kill and now carcass is down from the den and near the flats.  Missed it again.  I headed back to Hellroaring as the Prospect Peak Pack was suppose to be in view.  They had nine of eleven in view, but as I showed up they were bedding.  Only five of the wolves were in view, most bedded on a small snow patch.  Determined to get my count to nine I waited until after 3:00 p.m.  The wolves finally got done with their nap and moved up hill.  Bob B and I counted several times but only counted four grays and four blacks.   More missed sightings today.  Someone had a black bear possibly with a cub or more up the Tower Road.  I walked as far at Calcite Springs, but no bears.  Jim F. called tonight reporting the black bear with two brown yearling cubs were just east of the Yellowstone Picnic Area.