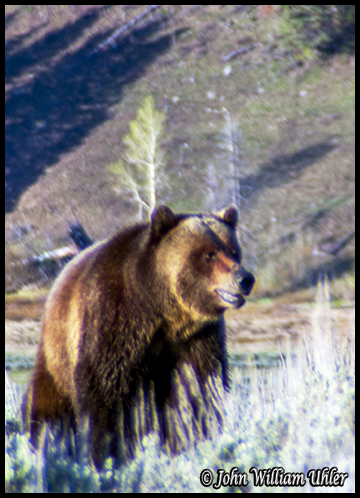 
First an update on the Blacktail ponds and the seven bison that drowned. On Friday, the Park Service dragged the four bison in the closest pond to the road and hauled them away. Rumors were to Stephens Creek boneyard. On Saturday after a large grizzly had pulled two of the three bison out of the water in the back pond and left the area. The Park Service closed off the area and dragged the three bison and loaded them. These were taken up the dirt road to the west at Blacktail Deer Creek.


A cold 18 degrees in Gardiner, but 10 degrees at Hellroaring this morning warming up to a nice 46 degrees with no wind. At 7:45 a.m. we had two Junction Butte black wolves bedded near the Slough Creek den. At 1:15 p.m. Jim and Bobbie F found a collared black wolf in Lamar Valley south of Picnic Pullout. After finding it had a GPS collar and a limp on the front left paw it was determined that it was 1109F. She is on her own now but was a former member of the Junction Butte Pack. However, she was always the fourth highest female which meant she routinely got beat up by the first three females. I did have a THREE DOG DAY today. At 5:30 p.m. I found the main Junction Butte wolf pack on the slopes of Hellroaring. Joe K joined me, and we watched twelve black and eight gray wolves hunting bison on the slopes. I left after an hour, but Joe stayed until dark, and the Junction Butte pack was not successful. A note: The current pack is twenty-two members with seven grays, but one collared gray from 1154F's group had come back to the Junction Butte pack. Eight of the ten wolves in 1154's group are former Junction Butte wolves and pups or yearlings can pretty much come and go as they please. Emil M did see the 1154 group yesterday and there were only seven blacks and two grays, missing a gray so for a little while at least the Junction Butte pack is at 23. 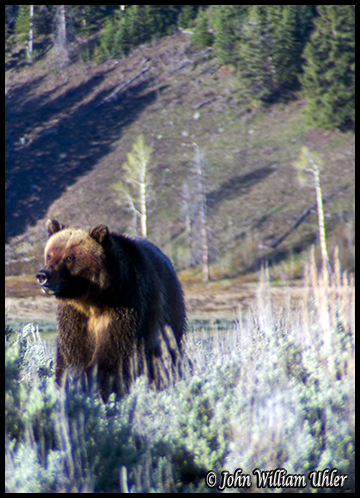 34 degrees in Gardiner but only 27 at Hellroaring warming up to 55 which felt colder because of the high winds in the afternoon. At 7:45 a.m. the black alpha male and 907F were seen near the Slough Creek den area. At 11:15 a.m. I found twelve of the Junction Butte wolves on the highest part of the Hellroaring Ridge on the east end of it. At that distance we could not determine blacks or grays, just counted wolves. We thought they were going to disappear over the top of the ridge but moved east on the top of the ridge. They almost went out of sight again then changed directions again and came down hill towards us just west of Little Buffalo Drainage, still a long look. They chased some elk but were not successful. Good viewing for almost an hour. At 3:40 p.m. two black and two gray wolves arrived from the east to the Sage Den in Slough Creek. They went to the Sage den and a gray collared wolf came out of den to meet them, probably 907F. Warren and Natalie saw a fourth gray that I missed.


25 degrees in Gardiner but 18 degrees at Hellroaring this morning warming up to 41 degrees with a little wind. At 7:00 a.m. I was at Hellroaring and watched a large herd of bison circle up. Seven black and three gray Junction Butte wolves were again hunting bison. The light was poor and worst after the sun came up. OK viewing when the wolves crossed a few snow patches but pretty much out of sight when they were on bare ground. They soon tired of the bison game and moved west crossing Little Buffalo Creek and out of sight. At 9:25 a.m. from the Confluence I watched a collared black, a collared gray, a gray, and a black. I had arrived too late to see a chase. The four wolves we guessed were the Mollies Pack had previously chased six Junction Butte wolves. The Mollies moved into the trees under K Meadow and were not see again. The Junction Butte wolves formed up again near Amethyst Bench. I only viewed one black and one gray of the six Junction Butte pack and that was at 10:10 a.m.


It was 23 degrees in Gardiner but 18 degrees at Hellroaring this morning warming up all the way to 37 degrees with afternoon winds made it quite cold. At first light Bob L found wolves from Bob's Knob with a carcass in Slough Creek straight in front of the Horizontal Forest. About 8:15 a.m. I spotted a large brown grizzly emerged from Slough Creek carcass area proceeding through the Lion Meadow to a small diagonal forest of trees below and west of the Slough Creek den area. The grizzly bedded in plain sight until at least 10:00 a.m. At 8:35 a.m. I hiked to Bob's Knob and viewed a total of eight black and four gray Junction Butte wolves mainly bedded near Slough Creek. A black and a gray moved east and out of sight and one black was located close to the Sage Den, the rest were near the creek. At 12:35 p.m. Cara M called with a large dark grizzly coming into the carcass area from the direction of the Lion Meadow. About 1:00 p.m. the large brown grizzly came out of Slough Creek and moved north into the trees of the Horizontal Forest and out of sight. At 4:20 p.m. the large dark grizzly came out of Slough Creek and moved through the trees just east of the Horizontal Forest and continued east in view for over thirty minutes. This grizzly stopped twice to rub its back on two different trees on its way east. Between 5:00 p.m. and 5:30 p.m. four black and three gray wolves milling around above the den area in and out of the trees.