30 April through 04 May 2021
Yellowstone National Park 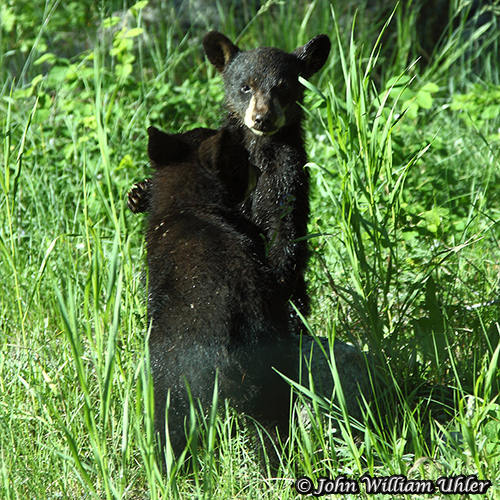 
Today was the day I returned to Idaho Falls to unload my motel stuff and load my camping stuff. I left before daylight and returned to Yellowstone by mid afternoon. 75 degrees this afternoon and a lot warmer than most other days in Yellowstone this year. At 4:25 p.m. we had a black bear right off the road south of Mammoth. At 5:15 p.m. I had a black bear sow with two cubs of the year (coys), one black and one brown east of Yellowstone Picnic Area. At 6:30 p.m. the grizzly sow with two yearlings were on Ski Slope best viewed from Lamar Canyon East.


32 degrees at Silver Gate this morning warming up to 69 degrees. I had a moose just off the road leaving camp this morning. At 9:00 a.m. the grizzly sow with two yearlings were again on Ski Slope. They were in view again at 5:45 p.m. At 3:30 p.m. a tall black bear east of the Horizontal Forest in Slough Creek. At 3:45 p.m. a black yearling wolf and an older black wolf were seen in the Slough Creek den area. At 7:30 p.m. Hayden G showed me a small black bear on the # 1 finger of Norris.


36 degrees in Silver Gate this morning warming up to 48 degrees. At 6:45 a.m. Frank H found a small colorful grizzly digging in the Lion Meadow. The grizzly was in sight until about 8:30 a.m. From 10:00 a.m. to 12:30 p.m. John G found the grizzly sow with two yearlings again on Ski Slope in their favorite place above the snow cornice in a large meadow best viewed from Fisherman's Pullout or Lamar Canyon East. At 1:00 p.m. Randi M found a grizzly digging in the snow on K Meadow. At 2:30 p.m. the 3 1/2-year-old Slough Creek sub adult was sighted high north of Fisherman's Pullout. At 3:30 p.m. a black yearling and an older black wolf were around the Slough Creek den area. At 7:05 p.m. we had a black bear on the # 2 finger of Norris. 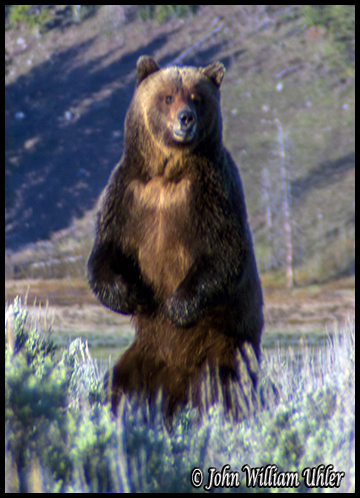 36 degrees this morning warming up to 53 degrees. I viewed a vulture and a dusky grouse today. Today the snow removal equipment traveled thru the valley to plow the Chief Joseph Road to Cody and the Beartooth Highway. At 6:30 a.m. Frank H had a small colorful grizzly surrounded by ten wolves near the Slough Creek den. A little harassment by the wolves was over when I arrived. I did watch the grizzly who remained bedded for a long time and five black and one gray wolf. At 7:40 a.m. Wes W found a grizzly digging in the K Meadow. At 12:40 p.m. John G found a large grizzly digging in K-2 Meadow viewed from Footbridge Pullout. At 4:15 p.m. the 3 1/2-year-old Slough Creek sub adult were seen high above Fisherman's Pullout viewed from Long Pullout in Little America. At 5:15 p.m. Mike W found a dark grizzly digging on Penny Lane best viewed from the Confluence. At 7:10 p.m. 1228F a gray female Junction Butte wolf was seen south of Dorothy's Pullout. Easy to recognize as she has a studded collar. Later I had a gray (probably her) and a smaller black wolf on Jasper Bench.


33 degrees in Silver Gate this morning warming up to 52 degrees. I viewed eared grebes, ruddy ducks and golden eagles today. At 8:30 a.m. I found a dark grizzly digging and throwing dirt on # 1 finger on Norris. Later he disappeared but reappeared on # 2 finger. At 9:30 a.m. we had a black Junction Butte wolf south of Mid-Point Pullout near the tree line moving east. At 10:05 a.m. the grizzly sow with two yearlings were spotted on Ski Slope. At 11:15 a.m. we had a small black bear off road near Geode Creek. At 1:50 p.m. we watched a large black bear off road at Geode Creek. At 2:55 p.m. Doug M (bear watcher) found a young colorful grizzly digging in Round Prairie. I had a THREE DOG DAY today. At 5:00 p.m. Dean D found a large black bear on the skyline high above Fisherman's Pullout viewed from Coyote Overlook. At 5:30 p.m. a gray and a black wolf were out near the Slough Creek den. At 8:10 p.m. my last sighting for the day was a large cinnamon black bear right off the road near the Wyoming state line five miles from the NE Entrance.


Now that I am camping and have limited access to WIFI, I will not be listing People Seen in my trip reports.